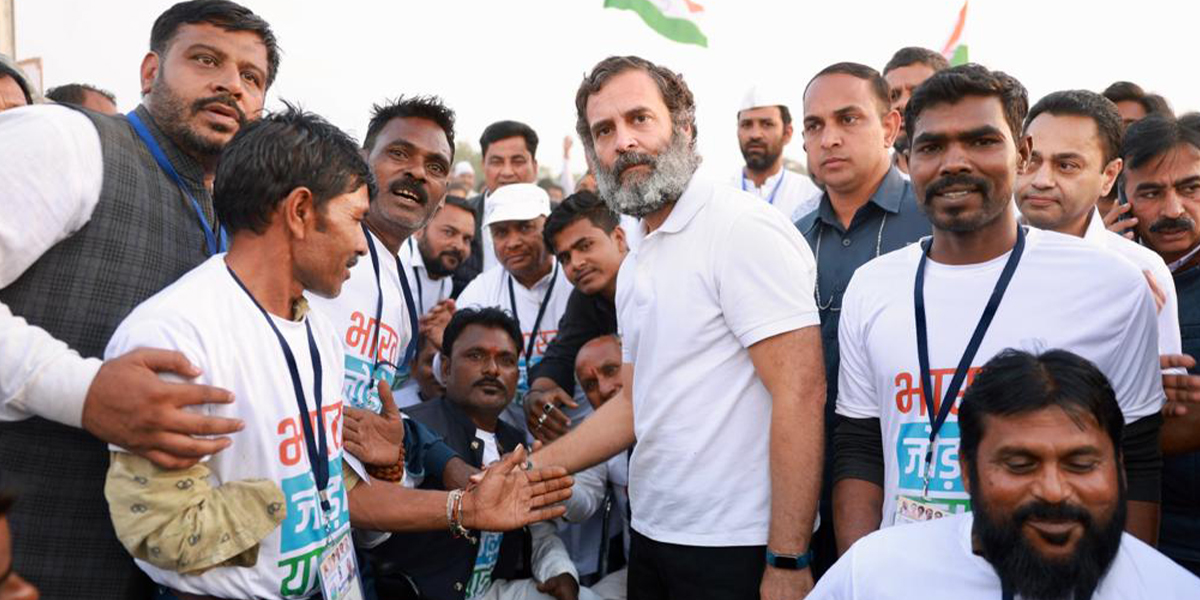 Mange Lal is a farmer has come with 15 or 20 of his friends. He had heard that the Yatra was coming by, and he wanted to make sure he was there to see it. But why is he there? In response he spoke of how he, a simple farmer, had been crushed under debt. As his crops failed due to bad weather, and in the absence of any viable insurance cover, he had no recourse but to present his case, hoping that someone would hear.

In fact the increased indebtedness of small farmers, who are simultaneously facing rising input costs and unprecedented taxation under the BJP government, is something that the #BharatJodoYatra has uncovered and highlighted in every state since it started, from Tamil Nadu onwards.

Like Mange Lal, a number of people had come of their own accord on the Yatris’ evening walk from Susner to Mangeshpur Chowraha. “I believe that they are drawn to the Yatra because they sense that we are genuinely sympathetic to their plight,” says Yatri Bikash Nath Yogi, “And our very presence in their neighbourhoods is proof of our sincerity.”

For Yogi, who’s from Assam, the Yatra is also an invaluable opportunity to learn about his country and experience new things. “Today I saw fields with orange fruits for the first time,” he said, “It was a unique experience for me.”

Indeed the farming landscape changed somewhat on this leg, as the Yatris walked through fields of oranges and grapes on either side of what was mostly a rural environment.

Yogi was also struck by the diversity of people flocking to see the Yatris along the way, in villages such as Badiy and Nipania. “Grandfathers with their infant grandchildren, women of all ages, youth – it’s like everyone’s there.”

And their goodwill and sincerity is obvious. Lalita and her niece Heena had been waiting for the Yatra to pass by for a while when we caught up with them. “Rahul bhaiya has been walking for a long time,” she said, “I can only wish that the Yatra is a success”.

Others were prepared to travel as long as it took. Ramkunwar Bai, a disabled person, was accompanied by her entire family as she traveled on her rickshaw. “I wasn’t able to see the Yatra before,” she said, “This time I’m determined to catch and try to meet Rahul.” Her grit and determination is to be admired.

The Yatris were accompanied during their walk by representatives of the Chhatisgarh Bachao Andolan, the Bundelkhand Jeevika Sanghatan, and also the vocalist TM Krishna.

Earlier in the afternoon Congress MP Rahul Gandhi had an interaction with farmers, and representatives of cooperatives and Farmer Producer Organisations.

Currently in the state of Madhya Pradesh, the Bharat Jodo Yatra is a five month, 3500 kilometre long Padyatra from Kanyakumari in the South of India to Kashmir up in the North. It is part of the party’s national mass outreach program aimed at highlighting social polarisation, economic inequalities and political centralisation.

1. District name: Agar Malwa
2. Agar Malwa is the most newly-formed district of Madhya Pradesh.
3. Agar town is known for the temple of Jai Baba Baijnath, said to be built by a British citizen in the 19th century.
4. Agar is known for its red soil, said to be found in a short radius around it.

The night is darkest just before the dawn. And we promise you, the dawn is coming. #BharatJodoYatra pic.twitter.com/awLXReFbXY